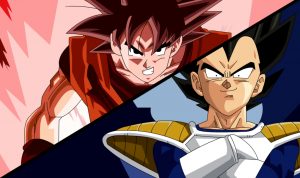 The show which was first started in 1989. No one had ever thought it will come such a long distance. There is already enough talking about Dragon Ball Super, but today we will like you to go back in time and enjoy the moments of how it all started.

This article is much useful for those who did not see Dragon Ball Z instead they started from Dragon Ball Super because after reading this article they all will completely understand about the Goku vs Vegeta (Kakarot vs Vegeta) first fight, their Saiyan relations, the difference they have and about their friendship.

Goku (Kakarot Saiyan name) was born to a full-blooded Saiyans Gine (Mother) and Bardock (Father). Goku had a brother name Radiz who was killed by Piccolo at the start of Dragon Ball Z. Goku was sent to earth to destroy it and then sell to the Tuffles.

When landed on the planet earth he was picked up by Gohan (an old Man). Gohan take care of Goku when he was an infant and as a Saiyan Baby Goku was evil until he was accidentally dropped by Gohan into the waterfall and hurt his head badly. Due to the injury, Goku had lost his memory or the goal for which he was sent to. From that day Goku became a good boy and that’s how his journey started.

Vegeta spent harsh life during his childhood. He became a slave of Frieza when he was a kid. The Prince had to do slavery, and that is why Vegeta’s character is aggressive.

How Both Saiyans Met With Each Other

After many years (Dragon Ball) Goku’s brother came to earth to remind him that he has to destroy the planet so they can sell it. But, Goku refused the offer so Radiz had to fight with Goku but he was killed by Piccolo.

Piccolo said to Radiz that they will resurrect Goku soon with the help of Dragon Balls. Radiz scouter transmitted this information to the low-class of Vegeta and Nappa and that’s how Vegeta came to known about the Dragon Balls. Vegeta departs for Earth so he could wish for immortality. 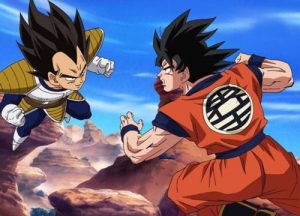 Goku came from the dead to help his friends in defeating the Saiyans, Nappa, and Vegeta to maintain the peace on his planet. That’s how showdown between Goku and Vegeta started.

When Goku first arrived on the battlefield, His power level was much greater than Vegeta and Nappa. When Nappa lost to Goku, Vegeta destroyed him with the Ki Blast.

Goku used his Kaioken technique which made him stronger than Vegeta. After losing badly to Goku’s Kamehameha wave, He lost his pride and started hating Goku. To kill him he transforms into a Great Ape and crushed Goku. Due to Krillin and Gohan (Goku’s Son), Goku was saved. Goku requested Krillin not to kill Vegeta because they both are Saiyans. After defeat by the earthlings, Vegeta lost his pride. 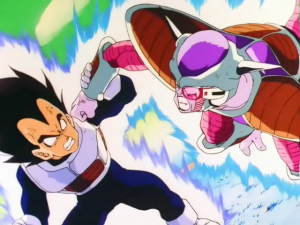 In order to gain immortality, he traveled to a Planet Namek where he faced Frieza. Goku and his friends in search of Dragon Balls arrived on the same planet.

Vegeta thought he had attained the legendary Super Saiyan form and therefore he challenged Frieza, which proved him that he is not Super Saiyan. After realizing that he submit himself to Frieza and getting killed himself.

When Goku fought with Frieza he attained the legendary super Saiyan form which hurt the pride of the prince. In meanwhile the prince started getting feelings about Goku and his families. And ultimately he joined the gang of Z-fighters. 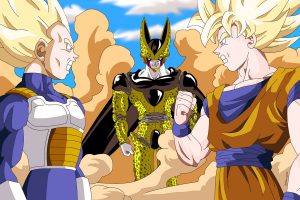 Prince pride comes once again when he (Super Vegeta) fought semi-perfect cell. He humiliated him and beat him to the ground. After that he allowed the cell to become complete and then he face the same humiliation which he gave to the cell.

Goku surprised everyone with his strength in cell games while Vegeta was disturbed due to his high power. After that Gohan surpassed the regular super Saiyan and became ascended Saiyan (Super Saiyan 2) and defeated cell.

This was the moment which Vegeta hurt the most that he is lost to a half-blooded Saiyan. Goku sacrificed his life to save the life of his son and everyone on the planet. 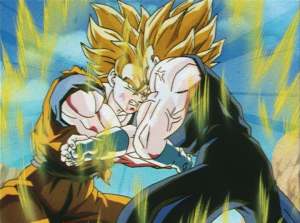 In the World’s Martial Arts Tournament, The battle was decided between the Goku and Vegeta which was postponed due to the controversy of Buu and Babidi.

After watching Goku fighting with Babidi’s monster Yakon Vegeta realized that Goku is still stronger than him. He submitted himself in the spell of Babidi which allowed him to become a Super Saiyan 2.

Goku had Super Saiyan 3 that time but he did not transform more than SSJ2 in front of Vegeta because he did not want to hurt more his Saiyan brother. Goku made Vegeta believe during their fight that they have become equal in strength and power.

After Goku made Vegeta realized that his family needs him and he has stopped the Buu, then Vegeta understand the consequences and in order to save the family of others and his own he self-destruct himself and proved that he has changed from evil to good.

But Buu survived the blast and lots of transformations and battles take place between the fighters and Buu. When Buu absorbs Gohan, Goku lost his hope in defeating the Buu when suddenly he senses the presence of Goku. 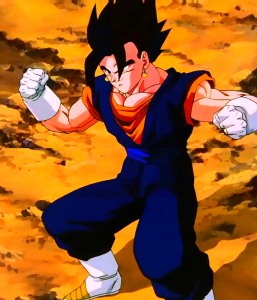 Vegeta gets angry on Goku saying that he hide the truth that he can become the Super Saiyan 3 while he could not. After beaten by Buu Goku request Vegeta to fuse with him with the help of potara earings. And then an ultimate fused warrior is born Vegito.

After getting defused inside the Majin Buu and remove the cords of Gohan, Goten, Piccolo, Trunks and Fat Buu. The Majin Buu turn in his original form Kid Buu. He suddenly destroy the planet Earth and but Goku and Vegeta manage to survive to the Kai Planet.

Supreme Kai advice Vegeta and Goku to use the earings to fuse but they reject it by saying that the Majin Buu is not fused anymore so they will fight alone without getting fused because it is against their Saiyan Pride.

In their last battle, Goku after getting tired from fighting Majin Buu asked Vegeta to buy him some time so he can recover his strength. Vegeta unable to fight Buu because of the huge difference in Power. After realizing that he is no match for Buu. Goku saved him by deflecting the Ki-Blast of Buu. 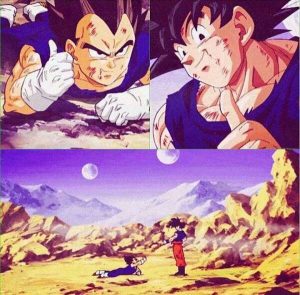 Seeing this Vegeta get impressed by Goku that after getting so tired how he can fight with Buu again he. He recalls all his memories about his and Goku and finally admits that Goku never wanted to show off his strength he just wanted to get stronger and stronger. He fought never to kill anyone or for revenge. He fought just to save his loved ones and maintain peace. Vegeta finally admits that Goku is better in all aspect then him and then he pays respect to him.